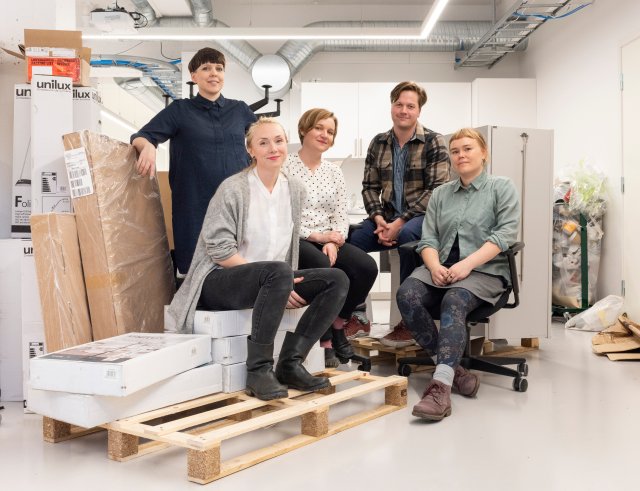 The Faculty of Fine Art, Music and Design (KMD) has employed nine PhD fellows in the new artistic PhD program, which recently was established at the University of Bergen.

Short about the projects:

Søren Thilo Funder: “THE HORROR OF THE DROP - Contemporary horror fiction as counter-narrative in political art practice or surviving the night in the haunted mansion of absolute capitalism.” THE HORROR OF THE DROP is a research project about the alienating effects of absolute capitalism and the possibilities of artistic research and visual experimentation to adapt and utilize contemporary horror fiction - as the very format of alienation - to counter this effect.

Pauliina Pollanen: The aim of the research is to interpret the role of skill in the context of artistic practice, and to explore and explain its cultural and social meanings through the methods of deskilling and reskilling, and at the same time to produce critical content and conceptual aspects.
In the arts the concept of skill has been especially related to material based artistic practices and craft diciplines. In the contemporary fine art field skill has become more and more absent in every genre. The aim is to bridge the gap between fine art and material based art by examining skill and labour through an artistic practice.

Sveinung Rudjord Unneland: “Urgent affairs, strange empathy. Abstraction and receptivity in art.” In the ambiguous area where the personal interest of the artist and the public realm of art meet and merge, Unneland tries to evolve questions around spectatorship and the exhibition specially focusing on the exhibition as a critical form and artistic medium. This approach has roots to Robert Smithson complex staging of experiences between art and spectator. But from his legendary contest of modernist dogmas until today, the scene have evolved rapidly. What used to be strategies of resistance is now fully embraced by a culture-industry that reduces critique through absorption in the urge to transform experience into capital. In this situation, how do we engage critically with art-production and exhibition-making? Is it possible to keep critical art alive, intact and relevant?  These are some of the underlying questions that inform Unnelands practice in general and that he finds significant to tackle in order to create a meaningful investigation into the criticality of the exhibition as an artistic form-, strategy and medium.

Tijs Ham: “Tipping Points”. How can the exploration of tipping points in chaotic processes, inform the development of new electronic music instruments, compositional strategies and performances, enhancing sonic expression?' During the research Ham will develop three new instruments, each based on chaotic processes, allowing him to explore the fragile and explosive sonic artifacts that occur on the boundaries between predictable and unpredictable behavior. How resonances either disintegrate or change through unforeseen collapsing modulations.

Natalya Pasichnyk: “Rethinking WTC - a new interpretation through the prism of the theory of Boleslav Javorsky.” Pasichnyk intends to explore how the ideas of the musicologist Boleslav Javorsky and others will work with her own understanding of Bach’s Well-Tempered Clavier. How can metaphors, images and semantic understandings inspire and inform my performance? Broadening the performer’s role to a more co-creating one, she will experiment with the inter-weaving of the quotations of Protestant chorales with Bach’s harmonically and polyphonically complex piano part.

Siv Lier: "Human objects" The project is about the close relationship between man and the manmade, and is based on the fact that we are constantly recreated by what we create. As the senses play a major role in how we experience our surroundings, Lier will explore situations where we physically interact with objects and look at how we are affected. This may be training situations or other situations where body meets objects. Lier uses design as a method of social investigation, asks questions and reflects on aspects of being human.

Ingrid Rundberg:  «Things that may be true». In this project, Rundberg will use design to investigate what happens when we create our personal political opinions and how this creation of meaning takes place. Participating design is one of the foundations of the project, and to involve others from the start, parts of the initial survey will take place at Bergen Public Library. Through a series of open lectures during 2019 the theme will be highlighted from many different perspectives.

Siren Elise Wilhelmsen: «THE SETTLERS / DOMESTIC EXOTICS”. This artistic research project is approaching new materials and applications based on innovative and creative use of invasive plant species from the Norwegian Black List. Invasive alien species are a major threat to biodiversity and ecosystems around the world. Yet, rather than a burden with high expenses, could the surplus of these plants truly represent a portal into new insight and valuable sources of material, medicine or food? What origins, stories and qualities do they carry and how can we use this to build a bridge between environmental engagement and creative development within aesthetics and production? THE SETTLERS/ DOMESTIC EXOTICS stands as an opportunity to reflect upon the designers role and explore alternative paths, in which design can play an important role beyond the traditional context. It is an attempt to use design as a driving force for increased local commitment, through an experimental, hands-on process.